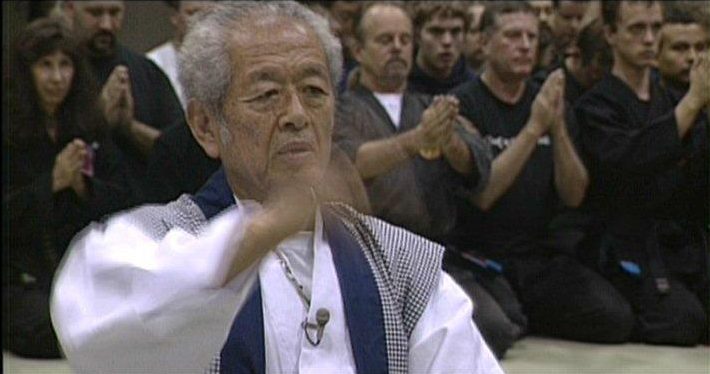 Grandmaster Hatsumi is the founder and International Director of the Bujinkan Dojo with its Hombu Dojo, the Bujinden (Divine Palace), residing in Noda City, Chiba Prefecture, Japan and has an administration office attached to his downtown home. He is married to his lovely wife, Mariko, a famous Japanese dance teacher and 10th dan director of women’s training for the Bujinkan.

Dr. Hatsumi is the inheritor of nine Ninjutsu traditions from the late O’Sensei Toshitsugu Takamatsu (the last true living Ninja) in the early 1970’s just before Soke Takamatsu’s passing in 1972. It is said that Dr. Hatsumi was the only one receiving indepth training with the great Takamatsu during the last 15 years of his life.

He graduated from Meiji University in Tokyo, with a major in theater studies, and osteopathic medicine (bone doctor). Soon after graduation he opened a bone clinic in his home town and his practice continued on a steady basis until about 1990 when his travel and movie schedule seemed to take over all his time. 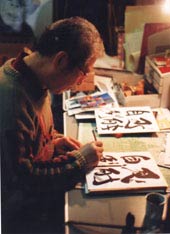 Grandmaster Hatsumi is the author of over a 20 books and 100+ DVDs on the art of Ninjutsu. He has been featured in almost every magazine relating to this subject in Japan, and throughout the entire world. He has authored countless magazine and newspaper articles on Ninjutsu and on living a productive life. He wrote, directed and acted in 50 episodes of a television series called ‘Jiraya’ which was the number one watched kid’s program in Japan. He is now what is called a historiographer of martial arts for various plays and movies, acting as a consultant to ensure that what is being portrayed is done correctly based on true history.

He is a past President of the Writers Guild of Japan. He is sought out as a speaker and television personality in Japan. He is an accomplished musician and singer who plays guitar and yukelale. For several years he played night clubs in a Hawaiian band as a singer and musician. The walls of his 3 story brick home display an elaborate collection of signed photos from presidents and leaders of many countries around the world, along with awards, certificates, and honorary degrees from some of the most elite organizations in the world. Among them are Honorary Doctorate degrees from the USA in Human Sciences and Philosophy, Honorary Texas Ranger, Title of Knighthood from Germany, Blackbelt Magazine’s Instructor of the Year, and Honorable Citizenship from the state of Texas and cities of Los Angeles, California; Atlanta, Georgia; Dublin, Ireland; etc.. In 2000 Soke was awarded Japan’s highest honor, the Cultural Award, by the  Emperor  of Japan for his worldwide martial arts contributions. Soke Hatsumi is now retired from active dojo teaching. He has issued 8 Sokeships for the individual Ryu/Schools in the Bujinkan ensuring that the arts continue. He has also passed the Bujinkan art on to his many DaiShihan instructors around the world.

Young Hatsumi was 7 years old when he first held his father’s wooden sword and took up training in the martial ways. That Bokken training blade was made of biwa wood, and his father was very proud of it. That was in the late 1930’s and that day became the inspiration of his martial arts life. As a young boy growing up he deeply involved himself in training in the martial arts of Japan. It was his love and passion. He studied everything he could, Judo, Kendo, Karate, Aikido, Okinowan Karate (Zen-Bei Butokukai) and Jukendo (rifle and bayonet combat). By the time he was 20 years old he had obtained the rank of 4th degree black belt in Judo. In 1951 this was a very high rank and rare for such a young student of the arts. This proves his dedication and perseverance since he tested against those much older and bigger than he. He found Judo to be sport oriented.

After the war years he took a break from martial arts for awhile. During his late teenage years he trained in western style boxing, continued playing soccer, and worked hard at his academic studies. Missing the dojo world of training he so loved and immersed himself into as a youth, he again returned to martial arts. He kept looking for something; he was not sure what it was but it seemed to be missing. Eventually he found himself at the door step of a man who would change his life and someday renew the world of martial arts, Master Toshigatsu Takamatsu, the last of the true Ninja. Master Takamatsu took him under his wing for the last 15 years of his life, taught him the Nine secret traditions and passed them on to him as the sole heir. Today these studies have become what we know of as the Bujinkan Dojo. Grandmaster Hatsumi has granted Shidoshi Richard Van Donk full permission and authority to represent his Ninjutsu / Budo Taijutsu art outside of Japan. Therefore with his blessing and encouragement the International Bujinkan Dojo Association was formed and offers the teachings of Grandmaster Hatsumi to the general public.