O’Sensei Takamatsu (as we at ABD call him) was born in the 23rd year of Meiji (10th March 1887), in Akashi, Hyogo province. His given name was Hisatsugu but he later changed the name (using the same
kanji characters but different pronunciation) to Toshitsugu.

O’Sensei Takamatsu was one of the greatest martial artists to ever live. He not only practiced his art …. he lived it and  victoriously fought many to the death battles from challengers.

He began his training at an early age. His grandfather, Toda Shinryuken Masamitsu, had a bone clinic, and a Budo Dojo in Kobe.
In this Dojo he was a Soke of a fighting system known as Shindenfudo Ryu. Toda was of Samurai rank, and originally came from Iga province. Some of Takamatsu’s family had come from Takao, a mountainous part of Iga. Above the door of the dojo was a plaque that read “Shindenfudo Ryu Jutaijutsu”. Toda also taught Shinden Koto Ryu Karate (later changed to Koto Ryu Koppojutsu), Gyokko Ryu Kosshijutsu, Kumogakure Ryu Ninpo, Gyokushin Ryu Ninpo, and the Togakure Ryu Ninpo Taijutsu. Grandfather Toda was also a senior instructor in Bikenshin Ryu Kenjutsu, a school that taught the Tokugawa shoguns and he taught at a military academy in Nakano.

When he was 13 years old Takamatsu had mastered the techniques of the school. This meant that he was to become a licensee of the school, which was a common practice in the past. After he learned Shindenfudo Ryu, Toda taught him the Koto Ryu and then the Togakure Ryu. He found the Koto Ryu to be “fun”, but he had little interest in the Togakure Ryu Ninjutsu training.  Koto Ryu training involved hitting small pebbles with the finger tips. The nails and fingers would run with blood, and cause great pain. As the student progressed he would later move on to rocks etc.

In the spring of the same year he was 13 years old (1900), O’Sensei Takamatsu left high school to go to English School and the Chinese School of Classics in his home town of Kobe. It was while he was here that he entered the Takagi Yoshin Ryu where Mizuta Yoshitaro Tadafusa was the 15th Soke. He practiced at this Dojo everyday, and when he was 17 years old, Mizuta gave him the Menkyo Kaiden to the Takagi Yoshin Ryu. 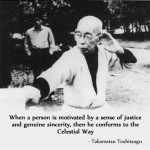 When O’Sensei Takamatsu was 17 years old, an old man by the name of Ishitani Matsutaro Takekage came to the match factory owned by Takamatsu’s father. Ishitani was famous all over Japan for his martial arts. He was using an old oak bokken for a walking stick. Takamatsu’s father gave Ishitani a job as security guard, and Ishitani was also given a small area of the factory to use as a Dojo. Takamatsu  leapt at the chance to study under the old man. From him he learned the “Kuki Happo Biken no Jutsu”. Ishitani also trained in various aspects of Ninjutsu and taught young Takamatsu aspects from several other schools of which he was also Soke. These were Hon Tai Takagi Yoshin Ryu (from which Takamatsu was already studying with Mizuta), Gikan Ryu Koppojutsu, and Shinden Muso Ryu.

On one occasion the sleeping area for the match factory workers caught on fire. As everyone ran around screaming, Takamatsu was observed to be smoking a cigar, watching the fire. He then got one of the thick gi training jackets, soaked it in water and put the jacket on. He grabbed a hanbo (3ft stick) and running into the burning area, started to knock down the sliding walls with the hanbo. The collapsing walls helped extinguish the flames, saving the rest of the factory. Ishitani is reputed to have watched  Takamatsu as he ran about knocking down the walls and commented that he was truly a great martial artist. Ishitani died a few years later, just moments after passing the scrolls on to O’Sensei Takamatsu. It is said that he died with his head in O’Sensei Takamatsu’s lap.

Takamatsu received his Menkyo Kaiden from Toda in 1909 when he was 22 years old. Toda died that same year on the 6th December, 1909. Toda once told Takamatsu, “Even when you are faced with death, die laughing”.

Other pieces of advice he had given him were:
1. Even when you are standing in front of defeat, do it smiling.
2. Never talk about your knowledge, it might make it disappear.

A short time after this Takamatsu left for China. One of the reasons he gave was that he wished to test his training and this was no longer possible in Japan. On his first trip to China  Takamatsu went via Korea, and studied there under Kim Kei-mei. He later mastered up to eighteen Chinese and Korean martial arts. 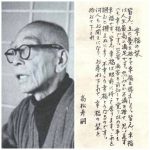 While in China he fought in several battles. In one of these battles a mounted soldier was charging at him. Takamatsu was at this point not armed, but a sword lay on the ground before him. As the horseman started to draw a pistol intending to shoot, Takamatsu ran forward, did a dive roll, picked up the sword, and sprang into the air cutting off the man’s head. He later told his students that it is of the greatest importance to be able to roll correctly in as many different ways as possible.

To survive in China, Takamatsu  taught martial arts. He told Hatsumi that at one point when he was at an English school he had over 1000 students. Many senior martial artists came to fight him. In the past you had to accept challenges from others – accepting was the only way to keep up your credibility as a martial artist and as a teacher. He fought every challenger and never lost a single fight, although some were declared draws. Takamatsu’s diary states that he fought 12 fights to the death, and 7 competition matches. The death fights were results of challenges. All of these things had occurred by the time he had attained the grand old age of 30.

Takamatsu returned to Japan in 1919. It was sometime after this that he went to the Tendai temple on Mt. Hiei in Kyoto, and was ordained a priest. Later he became one of the abbots of this temple. Though he said that he was not a religious person, he was very much attuned to spirit and it is possible that he was ordained in a total of three different religions.

Some other known facts regarding his life are that his wife was called Tane and she was born on 28th June Meiji 30 (1896) on the river side of Yodo-gawa, in the area called Hirakata. Also we know that he was an adviser on the movie “Shinobi no mono” which was made by Daiei. He taught Bojutsu to some of the actors in the movie. And, in his later life, Takamatsu ran a small tea house and hotel in Kashiwara, Nara, Japan. It was here that he taught a few students Ninjutsu. 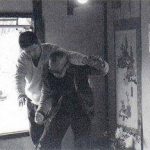 In the 1950’s, Takamatsu took on a new student, called Hatsumi Yoshiaki, a young man in his 20’s. Hatsumi traveled 15 hours almost every weekend for 15 years to study with O’Sensei. Hatsumi said that when he first met Takamatsu he was frightened of him, that he was a powerful and frightening teacher.

Takamatsu said to his other students, “I decided to leave everything in the hands of Hatsumi. I think he is the most suitable person in martial arts. I am now able to repay Toda Sensei, Ishitani Sensei, and Mizuta Sensei for their kindness. I intend to continue my studies into the secrets of nature.” One year before his death, Takamatsu told Hatsumi that he had taught him everything that he knew. Later, when training with Takamatsu, Hatsumi saw him stumble and fall onto one knee. Hatsumi Sensei  said that it was then that he realized that perhaps Takamatsu’s life was drawing to an end. Hatsumi took several students to meet and train with Takamatsu.

O’Sensei Takamatsu died on 2nd April 1972, aged 85. Though he stopped training at the age of 80, he had still continued to oversee Hatsumi’s personal training. O’Sensei is buried in the Kumedra cemetery near Nara, Japan.

Two things O’Sensei really enjoyed were walking and painting. He liked to walk every day for approximately one hour (he said that he was a very bad time keeper), covering approximately 8 miles. He would usually take his dogs (he had 20 Spitzes) with him on his walks. Just for his own pleasure he would paint everyday, simply because he enjoyed it and found it relaxing.

Long ago I was an accomplished warrior of the Koppojutsu tradition.

I was courageous, and as intense as a flame,

Even in battle against dangerous animals.

I have a heart that is like the wild flowers of the meadow,

And yet as straight and true as the bamboo.

Not even ten thousand enemies can cause me fear.

Who is there in the world who can keep alive this will of the warrior’s heart?

This one sent to me by the Warrior Gods (Bujin).

I have been here waiting for you through the ages.