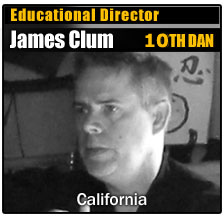 Shidoshi James Clum is instructor of Azusa Bujinkan Dojo.  He began studying martial arts when he was 13 years old in the 1980’s.    At 17 he moved away to California and began to study Hapkido, and after many years has earned a 5th degree black belt (godan) in this art.   Over the years he also learned Jujitsu earning a fourth degree black belt (yondan) in the American Jujitsu Federation and a third degree black belt (sandan) in Yoshin Ryu Jujitsu.  In addition he has spent 7 years learning Aikido earning a 2nd degree black belt (nidan).   He has continued  training in Bujinkan Budo Taijutsu from 2001 until the present.  He considers Bujinkan Budo Taijutsu and Aikijutsu the main arts that he practices.  His first and primary teachers are Shihan Richard Van Donk and Soke Masaaki Hatsumi.  Shidoshi Clum has had the opportunity to train regularly with several other veteran teachers over the last 7 years of advanced rank whom he also considers his teachers.  He is currently a 6th degree black belt (rokudan) and a licensed teacher (Shidoshi) by  Grandmaster Soke Masaaki Hatsumi of Noda, Japan.  Of all of the arts that he has studied, he has found Bujinkan Budo Taijutsu (Ninjutsu) to be the most effective, most resourceful and the most interesting.